How to design a Cantilever Rack System

It becomes a simple matter to determine the required arms, uprights and braces
for your cantilever rack system

Determine the number spacing of arms

The load must be supported by enough arms to prevent load deflection. Deflection may cause damage to the load being stored as well as the arms (figure A1 as shown below).

Not enough arms to prevent load deflection
To detect deflection, place the load over two wooden blocks (to represent cantilever arms) as shown in figure A2

If deflection is not present it is acceptable to use a two arm system as long as this does not create an overload condition. If the load shows deflection use three blocks as shown in figure A3 or four blocks as in figure A4.

Determine the length of arms

The depth of the load should never exceed the length of the arm. A 48″ wide bundle of plywood requires a 48″ long arm, bundles of steel 24″ wide require a 24″ arm and so on. Rated arm capacities may be seriously diminished if proper loading techniques are not observed. Figures B1, B2 and B3 illustrate correct and incorrect arm loading. 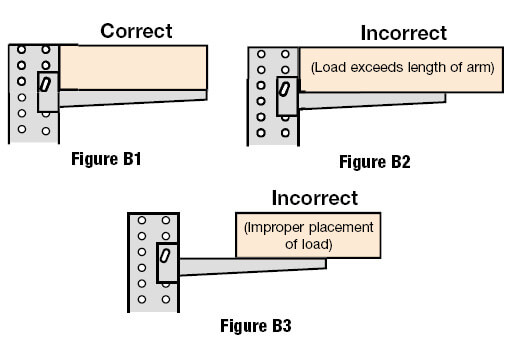 NOTE: All arm capacities are based on an evenly distributed load as in figures B4 and B5 below.

Determine the height of upright

When determining the height of the upright it is important to consider the ceiling height, forklift reach, sprinkler systems and other factors, such as local building codes that might affect the overall height. The height of the upright in figure C1 is determined by adding the base height, the number of loads to be stored, the arm thickness plus 6″ clearance between the load and next arm. 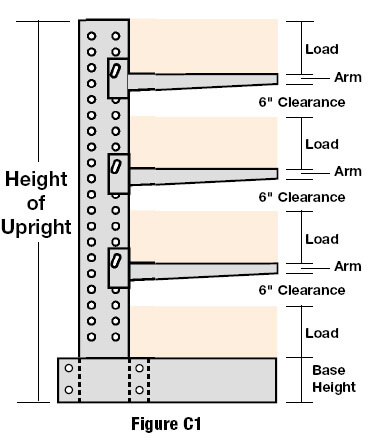 As previously discussed, each arm supports an equal amount of the load’s weight. By determining the number of arms per level and dividing it into the weight per level, the required arm capacity can be determined (see example at above). To determine the required capacity of each upright, multiply the number of arms per side by the load on each arm. In figure D1, each arm holds 2500 lbs. Twelve arms per side times 2500 lbs. per arm equals 30,000 lbs., which when divided by three uprights, results in a required minimum capacity of 10,000 lbs. per upright. The correct upright can be selected by matching the minimum upright capacity of 10,000 lbs. with the upright capacities set forth on the following pages. Assuming a 48″ arm, the U1061-NS on page 22 with 10,200 lbs. capacity and the U1061 on page 23 with 12,600 lbs. capacity are the only uprights that will handle the load. NOTE: The Series 1000 MU1057 has only 3100 lbs. capacity while the Series 20002U1062 has 8600 lbs. capacity 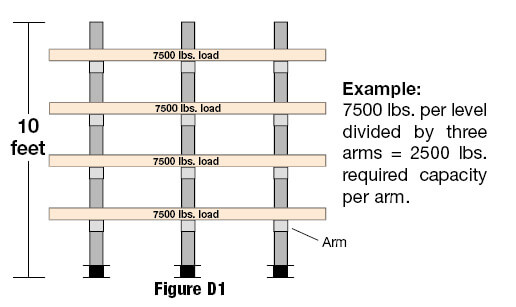 Brace length is defined as the horizontal distance from centerline of upright to centerline of the next upright. Refer to the various brace set charts for the brace length that most closely matches the arm spacing determined in step A.